I am pleased to report that negotiations are progressing well with representatives from my office and the Power and Water Corporation meeting with the unions on a weekly basis.

The unions provided their log of claims on 25 March 2021 consisting of over 140 claims. Negotiation involves the parties working through each claim, including the employer’s proposals, to understand the issues and identify any cost implications or savings for NT Government.  Negotiations have been constructive with all parties actively engaging in discussions with the aim of reaching a proposed new agreement for employees to vote on.

It is usual during negotiations for parties to indicate their 'in principle agreement’ to particular claims.
'In principle agreement’ means the general terms of a claim, or an employer's proposal, are supported without the complete details having been specified or necessarily agreed upon.

'In principle agreement’ is subject to the totality (or all) of the enterprise agreement matters under negotiation being acceptable to the relevant party.

Following the progress made by the parties during their bargaining meetings, on a without prejudice basis, 'in principle agreement' has been provided to the following:

I acknowledge that unions and employees may have been expecting proposals for salary increases from the employer, as per previous agreements.  However, to support the NT Government’s budget reform agenda and to support job certainty for employees, I am proposing:

Further details of my proposals are outlined in Power and Water Corporation Bulletin 2.

The parties will continue to work constructively over the coming months to finalise a proposed new agreement.

Power and Water Salaries and CPI 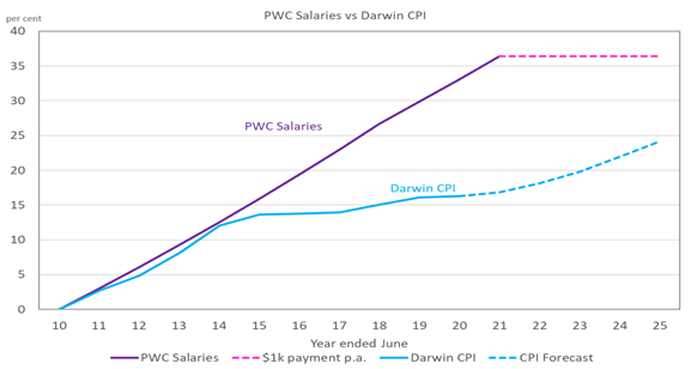 Have your say – your feedback is important

Should you wish to express a view on the proposals or make a suggestion, you can provide your feedback to me by emailing enquiries.ocpe@nt.gov.au

Information on bargaining in general can be obtained at www.fwc.gov.au or you can contact the Fair Work Commission information line on 1300 799 675.

URL copied!
Back to top
URL: https://ocpe.nt.gov.au/employment-conditions-appeals-grievances/enterprise-agreement-negotiations/power-and-water-corporation/bulletin-3 17 May 2022, 11:15 am