Department of Industry, Tourism and Trade

On Friday 5 March 2021 the Agriculture, Fisheries and Defence division of the department farewelled Ben Beumer into retirement after a remarkable 50 years with the agency.

While Ben officially started with the Commonwealth as a skinny ringer (animal attendant) at Beatrice Hill Farm in December 1970, he actually started as a casual at Berrimah Experiment Farm at an earlier date. At Beatrice Hill Farm, he was involved in all aspects of running the property, such as land clearing, fencing, cattle and buffalo management, operating machinery and planting pastures, including the pangola grass pastures which are still there today.

One of his jobs was mustering on horseback, which he also did at Kidman Springs (VRRS) in the Victoria River District for 12 months in 1974/75. A flow on from this work were two trips to capture Bantengs (Bali cattle) at Coburg Peninsula, i 1972 and 1979. This involved chasing the Bantengs on horses and tail throwing them, then looking after them before they were loaded on a barge for transport to Darwin and then Coastal Plains Research Station.

Later Ben grew rice in trials at Coastal Plains Research Station with Jack Koomen in 1978 and 1979.

After a period as acting manager of Douglas Daly Research Farm from 1979, Ben transferred to Pastures Section to re-join Jack, as a technical assistant the earl 1980s. Ben used his previous experience with land clearing, fencing and machinery operation to ensure the successful conduct of pasture research trials for over 10 years. His skill with a welder and designing machinery led Ben to construct specialised machinery and equipment for Pastures section such as ploughs, trailers, a portable dehydrator, a chopper roller seeder and two brush harvesters amongst other items. He was also asked to travel to Alice Springs to help departmental staff with fencing and cattle yard construction a number of times. 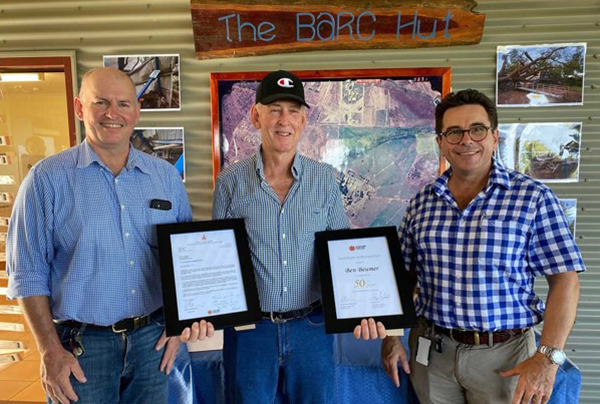 While at Pastures section, Ben helped animal health stock inspectors during the BTEC program on trips to remote areas to sample animals.

During the 2000s, Ben continued to work to improve the productivity of Top End properties. He also contributed as a member of department’s Carrying Capacity team and worked closely with the Rangelands team, the Indigenous pastoral production officers and other departmental staff.

The department wishes Ben all the best on his retirement and thank him for his tireless efforts over 50 years working for the department. Take care Ben!

Back to the employee list
Back to top
URL: https://ocpe.nt.gov.au/people-and-planning/reward-and-recognition/ntps-employees/2021-recognition-of-service-milestones/50-years/ben-beumer 1 July 2022, 4:34 am